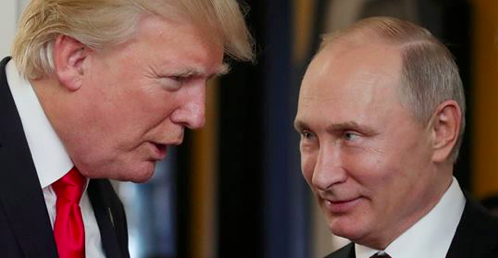 Kudos to former U.S. ambassador to Russia Alexander Vershbow for proposing tangible steps to “reduce the risk of direct conflict” with Russia, while cautioning in his June 25 op-ed that “There is no grand bargain with Putin.” First among Mr. Vershbow’s suggested measures for agreement at a summit was trimming the size of military exercises in Europe.  ( See:

https://www.washingtonpost.com/opinions/global-opinions/trumps-grand-bargain-with-russia-is-an-illusion/2018/06/21/b4828344-7583-11e8-b4b7-308400242c2e_story.html?utm_term=.7300e9749bf5 )
A parallel suggestion was made by Russian President Vladimir Putin’s close aide and spokesman Dmitry Peskov two days after Donald Trump’s election. Mr. Peskov, in New York ostensibly to attend a championship chess match, talked to the Associated Press about “confidence-building measures.” He proposed a “slow down or withdrawal of NATO’s military potential from our borders,” adding that Russia sees “NATO’s muscles . . . getting bigger and bigger and closer.”
In early June 2016 in Berlin, I had a previously scheduled meeting with the chairman of the German Bundestag Defense Committee in his office. I took note of the launch that very morning of Anaconda 2016, the largest war game since the Cold War, with 31,000 NATO troops from 24 countries.  The chairman left me with the clear impression that he would fully agree with the sentiments expressed by Mr. Vershbow and Mr. Peskov.
Ray McGovern, Arlington
The writer is former chief of the Soviet foreign policy branch of the CIA.
Post Views: 1,897

← Did Sen. Warner and Comey ‘Collude’ on Russia-gate?
“Did the U.S. “Intelligence Community” judge that Russia interfered in the 2016 presidential election?”  No, says Amb. Jack Matlock, drawing on his unique personal experience — with Russia AND the U.S. Intelligence. No duck hunter, Matlock nonetheless shoots le gran canard of “Russian interference” quite dead. →