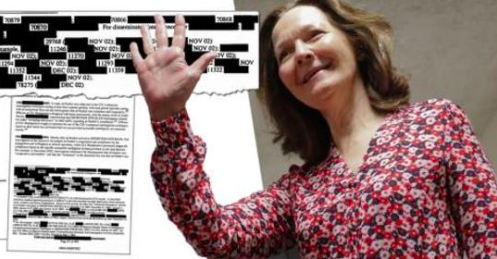 Recall what happened to Ray when he tried to expose this same information at the “open” hearing on Haspel’s nomination.  Kudos to the National Security Archive. Here is brief excerpt from the Archive report:

… The released Haspel cables feature extensive redactions by the CIA, including their dates (although those can be ascertained from the declassified CIA Inspector General’s report, among other sources) and most of the information results from the torture (although those have been summarized by the Senate Intelligence Committee report and two of the Haspel cables even admit failure to produce actionable intelligence). [emphasis added.]

The biggest mystery in the released cables is whether Gina Haspel wrote Cable 11359, from December 1, 2002, which uses remarkably vivid language to describe the torture sessions: The interrogators “strode, catlike, into the well-lit confines of the cell at 0902 hrs [redacted], deftly removed the subject’s black hood with a swipe, paused, and in a deep, measured voice said that subject – having ‘calmed down’ after his (staged) run-in with his hulking, heavily muscled guards the previous day – should reveal what subject had done to vex his guards to the point of rage.”

Not only Haspel, but co-conspirators Burr and Warner need to be held accountable.
Those “gentlemen” from North Carolina and Virginia are now thoroughly discredited, not only as tools of the CIA, but also as co-conspirators in concealing documentary evidence of war crimes.
And still, many choose to trust their bizarre approach to “Russia-gate?”  Go figure.
Post Views: 9,148

← “Russia-gate: Can You Handle the Truth?” is title of Ray’s talk Saturday, sponsored by the Seattle Chapter of  Veterans For Peace and KODX Radio at University Temple United Methodist Church; filmed by Mike McCormick.
Senator Richard Burr: a Longtime Fan of Torture →