Miracle and Myth: We Have Not Yet Blown Up Our Planet = Miracle; Our Luck Will Hold Indefinitely = Myth 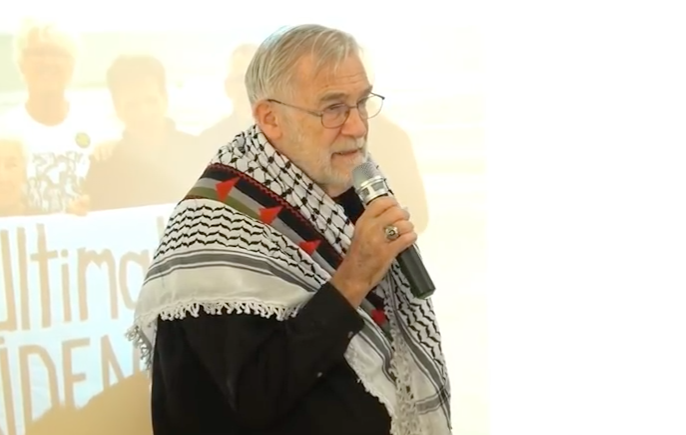 A talk by Ray McGovern at Ground Zero, Pudget Sound, next to the Trident Submarine Base
https://www.youtube.com/watch?v=zfMj1aflgPU&feature=youtu.be
August 5, 2018 (talk is 49:30 minutes; Q and A runs from min. 50:45 to 1:32:00)
Among the topics covered in Ray’s talk …
Tribute to the King’s Bay Plowshares and to “Arch” — the late Archbishop Raymond Hunthausen, supporter/benefactor of Ground Zero.
Ernie Pyle finds deep racism in Pacific theater.
Two who helped prevent the world from being destroyed: Vasili Alexandrovich Arkhipov; Melvin A. Goodman
“The Doomsday Machine:” A MOST IMPORTANT BOOK
Autumn 1983: from KAL-007 to “Able Archer” — a very close brush with extinguishing the planet
Seeking Justice with little prospect of immediate results
Standing up to oppression: from Dan Berrigan to Helen.

Why Ray was “escorted” out of the Gina Haspel nomination hearing
Should we fear Trump meeting with Putin alone?
Iran: decades ago and more recent history
Comparing a thoroughbred National Intelligence Estimate (NIE) to a neutered/mongrel, evidence-free “Assessment” by “handpicked” analysts from only three agencies
Israel’s predominant role in U.S. Middle East policy making
WHAT ONE NEEDS TO REMEMBER IN ALL THIS:  As former FBI Director James Comey himself has admitted: “I was making decisions in an environment where Hillary Clinton was sure to be the next president.” Comey and co-conspirators, who decided — in that “environment” — to play fast and loose with the Constitution and the law, were supremely confident they would not only keep their jobs, but also receive plaudits, not indictments.  Unless one understands and remembers this, it is understandably difficult to believe that the very top U.S. law enforcement officials did what documentary evidence has shown they did.
++++++++++++++
Ray had sent the following paragraphs ahead to Ground Zero to help with publicity and to give the organizers some feel for the issues he planned to address (most of which he did address):

It is a myth that attacking Japanese cities with atomic bombs was needed to end WWII (though that’s what most of us were told in school). Six of the United States’ seven five-star officers who received their final star in World War II — Generals MacArthur, Eisenhower, and Arnold and Admirals Leahy, King, and Nimitz — rejected the idea that nuclear bombs were needed to end the war. Sadly, though, there is little evidence that they pressed their case strongly with then-President Truman before the fact.

So why did Truman do it? How much had to do with the fact that he and Secretary of State Jimmy Byrnes were incorrigible bigots? Does white supremacy still play a role today?

In his masterful book, The Doomsday Machine, Daniel Ellsberg offers this challenge: “Whether humans can eliminate the danger of near-term extinction [by nukes] remains to be seen. I choose to act as if that is still possible.”

It IS possible. All we need are dashes of hope, flashes of ingenuity, and renewed commitment to get our act together. Annie Dillard’s dictum is encouraging — if challenging: “There is only us; there never has been any other.”

There ARE enough of us; we ARE the ones we’ve been waiting for.

And what an honor “being with those, whether in kayak or on shore, active in the shadow of the Tridents; with folks paying the same ‘rent’ as author/poet Alice Walker (a shipmate on the “US Boat to Gaza” in 2011).  Alice famously wrote: “Activism is my rent for living on this planet.”

+++++++++++++++
The talk was recorded at the annual Hiroshima-Nagasaki commemoration at the Ground Zero Center for Nonviolent Action next to the Trident submarine base in Poulsbo, WA. The series of events included nonviolent protest actions. On August 4, a flotilla of kayaks and small boats in the waters of Hood Canal, outside the perimeter of Naval Base Kitsap Bangor, protested nuclear weapons; and on August 6, twelve people were arrested in for nonviolent civil resistance during an early morning vigil at the entrance of the base.

← ‘Too Big to Fail’: Russia-gate One Year After VIPS Showed a Leak, Not a Hack
Mueller’s Indictments Debunked By Former NSA Technical Director William Binney →