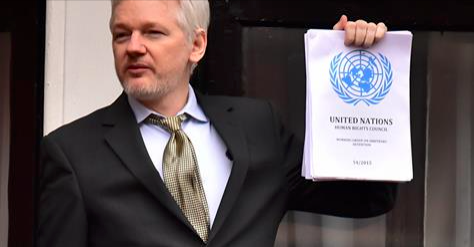 The “Resistance” Struggles To Justify Support For Trump’s Prosecution Of Assange
By Caitlin Johnstone, November 19, 2018
https://caitlinjohnstone.com/2018/11/19/the-resistance-struggles-to-justify-support-for-trumps-prosecution-of-assange/

Last Tuesday former National Intelligence Director James Clapper was asked why President Obama, two days before he left town, told a press conference that intelligence “conclusions” about “Russian hacking” were “inconclusive.” Clapper said he could not explain that.

(See:
https://consortiumnews.com/2018/11/14/clappers-credibility-collapses/ ) The reference was to one of the key conclusions of the so-called “Intelligence Community Assessment” authored by “hand-picked” analysts and briefed to Obama on January 5, 2017 (published the following day).

Here’s are the words Obama chose to use, less than two weeks later, at his final news conference (January 18), answering a question from Jeff Mason of Reuters.  Obama:

“ … the conclusions of the intelligence community with respect to the Russian hacking were not conclusive as to whether WikiLeaks was witting or not in being the conduit through which we heard about the DNC e-mails that were leaked.” (emphasis added)
https://www.nytimes.com/2017/01/18/us/politics/obama-final-press-conference.html

Watching the back and forth in media reporting over the past couple of weeks, it seems a safe bet that Mueller & Associates have finally conjured up enough “evidence” to “prove” WikiLeaks was indeed “witting,” and that this — by some stretch — justifies indicting and prosecuting Julian Assange (the 1st amendment be damned).
So what about us?  Do we stand by as, well, bystanders?  Better to ponder the following warning four decades ago by Hannah Arendt.  It sure looks like time for bystanders to become “winter soldiers?”

“The moment we no longer have a free press, anything can happen. What makes it possible for a totalitarian or any other dictatorship to rule is that people are not informed; how can you have an opinion if you are not informed?

“If everybody always lies to you, the consequence is not that you believe the lies, but rather that nobody believes anything any longer. This is because lies, by their very nature, have to be changed, and a lying government has constantly to rewrite its own history. On the receiving end you get not only one lie—a lie which you could go on for the rest of your days—but you get a great number of lies, depending on how the political wind blows.

← Clapper’s Credibility Collapses (with a little help from Ray)
Julian Assange deserves a Medal of Freedom, not a secret indictment →