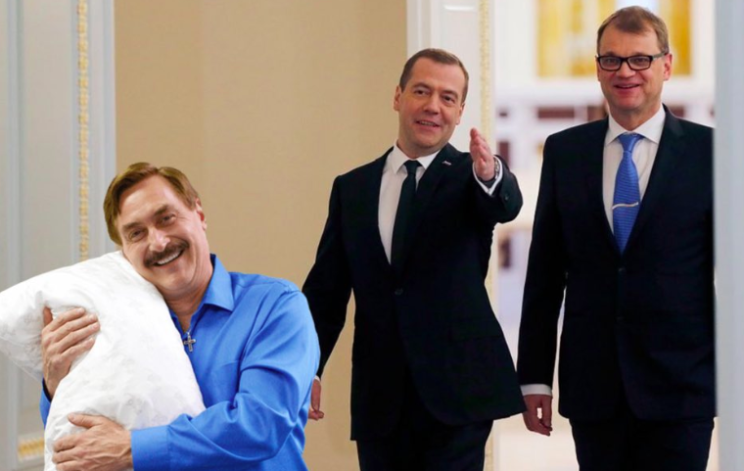 Putin henchman ready to assassinate Medvedev by pillow
https://twitter.com/almostjingo/status/1054963776661938176
(hat tip to Rosie Memos @almostjingo for tweeting)Rep. Adam Schiff, who takes the chair of the House Intelligence Committee in January, has a nose for hot tips about his bete noire, Russian President Vladimir Putin, as well as a strong bent toward credulousness.  On October 23, 2018, Schiff solemnly told a young audience at the old Hillary Clinton/John Podesta Center for American Progress Action Fund that he had been told that Putin has one of his henchmen follow Russian Prime Minister Dmitry Medvedev around with a pillow to smother him in his sleep if he ever gets out of line.

No, the video contains no hint that Schiff was speaking tongue in cheek.  Perhaps worse, no one in the audience laughed (where do they recruit such credulous young folks?).

Be sure to scroll down for images of the pillow-carrier caught in action. :-))  He apparently has no reason to fear “identification,” since, according to Schiff’s source, “Medvedev is nothing.”

On a more serious note, it was 22 months ago that I challenged Schiff as the “Russian hacking” accusations were proliferating. ( See: https://www.youtube.com/watch?v=SdOy-l13FEg ) In the 2-minute clip, Schiff recites language highly relevant today as the Deep State tries desperately to brand Julian Assange a “known participant” — that is, an active conspirator with Russia, and not merely Russia’s “useful idiot.”

Some of our “Justice” officials today apparently think they can detour around 1st amendment hurdles if they can dredge up, or manufacture, “evidence” enabling them to use the Espionage Act of 1917 against Assange.

At think tanks like the Center for American Progress, hope springs eternal.  Impatience too.  As poor Schiff knows, Mueller has been at it for a year and a half — and FBI super-sleuth Peter Strzok for a half-year before that, after which he complained to FBI lawyer/girlfriend Lisa Page that “there is no big there there.”  But when Schiff takes the chair in January, God knows what they’ll find!

Meanwhile back at the ranch, President Donald Trump and his chief advisers give no indication they are aware of what to expect, if Trump continues to allow the Justice Department to slow-walk his order to declassify crucial documents that could — in a lawful world — land ex-FBI Director James Comey, former Attorney General Loretta Lynch, former CIA Director John Brennan, et al. behind bars.
The stakes are very high.  By all indications Trump is afraid — and not only of pillows.