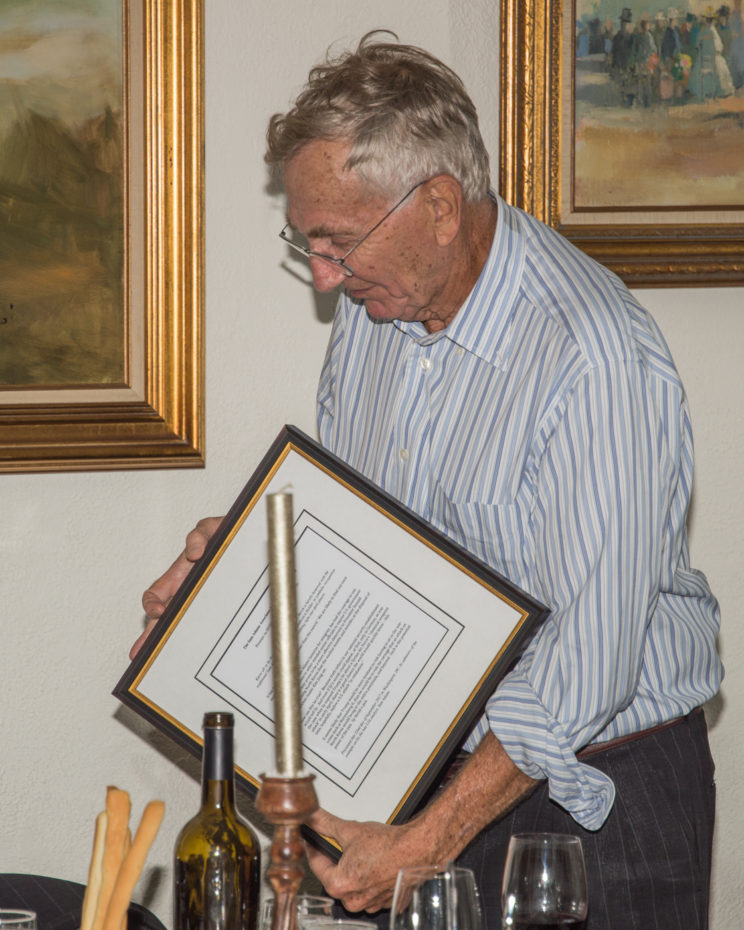 The trademark “Oscar” for Sam Adams Associates for Integrity in Intelligence was presented to Sy Hersh at a festive dinner in Washington, DC, on September 22, 2017.  (Part of the candle sitting atop the traditional corner-brightener candlestick holder can be seen in the photo.)

With tensions with North Korea on the front burner, this year’s citation was quite topical:

The Sam Adams Associates for Integrity in Intelligence

Presents its INTEGRITY AWARD for 2017 to:

Know all ye by these presents that Seymour M. Hersh is hereby honored with the traditional Sam Adams Corner-Brightener Candlestick Holder, in symbolic recognition of Mr. Hersh’s courage in shining light into dark places.

It has been said: “The pen is mightier than the sword.” We are likely to find out soon enough if that is the case.

Sy Hersh, this year’s Sam Adams honoree for integrity, has had the courage to use his unparalleled access to sober-minded senior officials to expose U.S. government misdeeds.  This may prove to be a more effective deterrent to President Donald Trump attacking North Korea than the nuclear bombs and missiles at the disposal of North Korean leader Kim Jong-un.

How can this be true?  Because truth tellers in our national security establishment would tell Sy.  And even if Sy’s words could appear, at first, only in German, as was the case when Sy exposed Trump’s lie about a Syrian Air Force’s “chemical weapons attack” in early April, there is a good chance the world would quickly know – this time, hopefully, before a U.S. attack “in retaliation.”

It seems likely that Trump would be more hesitant to risk having to sit in the war-crime dock at Nuremberg II, than he would be to risk the carnage that an attack on North Korea would bring to the entire peninsula, and beyond.  Such is the potential power of the pen.  Sy Hersh’s pen.

Presented this 22nd day of September 2017 in Washington, DC, by admirers of the example set by the late CIA analyst, Sam Adams