The Truth About Oil, Israel, & the Iraq War, 15 Years Later 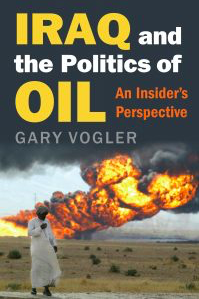 After the attack on Iraq, the question was WHY?  The intelligence fraud re WMD was exposed and the red herring linking Saddam with al Qaeda lay stinking in the desert sun.  Ray thought up an acronym: “OIL:” O for oil; I for Israel; and L for logistics; namely, the military bases the U.S. coveted.  John Stewart accused Ray of “violating the rule for acronyms.”  Congress’s reaction was not jocular.

It turns out that all three factors were very much in play.  Gary Vogler was on the scene in Iraq, and knows whereof he speaks.  Vogler gives the lie to doctrinaire arguments that the Bush/Cheney motivation had to be EITHER oil OR Israel (as if the two were mutually exclusive); rather, he adduces convincing evidence that it was a BOTH/AND.  It took some time even for a specialist like Vogler to discover that his initially altruistic view on U.S. motives was naive, and that he greatly “misunderestimated” the influence of Israel’s allies among U.S. neocons.

As for “L” for logistics, it became abundantly clear — both in U.S. lawmaking in Washington and on the ground in Iraq that the emplacement of permanent (later relabeled “enduring”) military bases was an important, but probably not THE most important, factor. Academic and other specialists on the Middle East have argued endlessly that the overriding factor had to be oil or Israel.  And a few outliers (like former CIA Director James Woolsey) keep arguing that it was neither oil nor Israel, but rather that the U.S. was driven by innocently mistaken intelligence. (Right!)
( See:
https://raymcgovern.com/2018/03/20/jim-woolsey-and-ray-debate-the-intelligence-on-iraq-on-the-charlie-rose-show-in-2004/ )

Ray was hardly an expert in either Iraq or oil.  Yet, it simply seemed abundantly clear that the rich oil deposits in Iraq had to be one of the main drivers.  From Vogler’s on-the-ground account, it is now a lot clearer just how the oil factor played out.

The Israel factor, of course, remains neuralgic.  Testifying on June 16, 2005 to a rump committee of Democrats convened by Congressman John Conyers, with C-SPAN cameras running (see *** below for Ray’s 3 minutes on Israel), Ray homed in on the Israeli factor — to the highly visible discomfort of virtually ALL congresspeople in the room.  It was simply beyond their ken that anyone would dare criticize Israel so directly, pointing out the power of the Lobby and the neocons, and the disaster they helped unleash into Iraq.  Several Members got up quickly, left the room, and sprinted off to the media to “set the record straight.”

The following day, the mainstream media (and, sadly, John Conyers) labeled what Ray said “anti-Semitic,” and both House and Senate hung around Ray’s neck a “LEPER” sign.  It is affirming to learn more, however belatedly, from someone like Vogler, who knows the territory.  Vogler even concedes that, initially, he himself was reluctant to believe what he can no longer fail to acknowledge and publish.  And it turns out Ray did not know the half of it.

Needless to say, with neocons like John Bolton back in place, this has current relevance and possible application.  Anyone know what deja vu means?

← The FBI Informant Who Monitored the Trump Campaign, Stefan Halper, Oversaw a CIA Spying Operation in the 1980 Presidential Election
“Morning After” Interview: Ray (Lockup #12, 05/09/18) spoke with Scott Horton about Ray’s experience in the Senate, and then jail, May 9 & 10, 2018 →